Long Island Aquarium staff members often participate in research projects conducted in partnership with professionals from other leading institutions. These projects play a vital role in expanding our knowledge of particular marine species.

The following is a brief description of the specific research that we are currently working on with Dr. Kristy Biolsi and Dr. Kevin Woo.  We work with them on various projects in the areas of cognition/problem solving and education/conservation. For example, our two adult sea lions are involved in a study on discrimination learning and symbolic representation,  our adult female sea lion and one of our adult female harbor seals are involved in a cognitive study on the gravity bias (investigating naive physics among other theories), undergraduates use web-cams to learn about conducting non-obtrusive studies on animal behavior, and we allow access for hydrophone and video recordings in the seal and sea lion habitats to help with research on ambient noise levels on marine mammal behavior.  In addition to these various areas of research, we work with C-SPEC and their affiliates on education and conservation through participation and presentations at public events held at St. Francis College.  All above mentioned research has been presented at scientific conferences and/or published in peer-reviewed/scientific journals.   In addition, there are a number of future projects in preparation.

This work is being carried out with two trained California sea lions (Java and Bunker) at the Long Island Aquarium (LIA).  The primary objective of this research is to study the process of learning, and in particular how physical objects in the world are mentally represented. Many objects in the world are represented in different ways, such as through symbols (e.g., language – both written and verbal/gestural), and pictures/photographs.  How one transforms a stimulus from the physical world into a mental representation and how we can use multiple items with varying physical properties to represent the same item has been an enduring and expanding area of interest in many scientific fields.  The question of whether these transformations are learned over time, or if it is an automatic cognitive process, does not currently have an adequate answer.  The process appears to be effortless but often in science we find that the processes that occur most easily to us are in fact the most complicated.

Our research in this area is adding to the current knowledge base on concept learning and object representation by investigating how non-humans represent stimuli across different mediums. A secondary research goal is to not only understand the mental process by which these transformations may occur, but to integrate this knowledge into a better understanding of how these animals function in the wild and to therefore gain a better understanding of behavioral ecology in relation to this species.

The current study seeks to add to previously obtained data by recording baseline noise levels and animal behavior on exhibit.

Four C-SPEC web-cams have been placed at the LIA which allow for remote observation of exhibits.  Researchers and approved RA’s are able to access and control video feed, and record, 24 hours a day/seven days a week in exhibits for the (1) Japanese macaque monkeys, (2) Atlantic harbor seals/gray seal, (3) California sea lions, and (4) river otters.

The cameras can be utilized for a number of reasons and RA’s are encouraged to propose research questions and studies that can be conducted using passive observation through the camera set-up.  Camera access is granted by Director/Assistant Director permission only. Anyone who has access to the camera system MUST return the camera position to its original location (zoomed out) as these are also used by the LIA security team.

This study was initiated, and primarily run, by SFC psychology MA student Afia Azaah during the 2016-2017 academic year. To date, of the various species tested (including developing humans under the age of two years), most subjects fail a task of logic and demonstrate what is known as the gravity bias. C-SPEC is working to investigate this in seals and sea lions both on land and under the water. It is the first test of marine mammals of any kind as well as the first test of an amphibious animal.  This is interesting to study as amphibious species (such as seals and sea lions) encounter the effects of gravity on both land and under the water where some objects sink and others are buoyant. 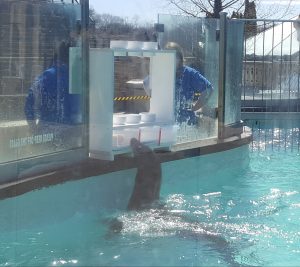 Description
The goal of this project is to clarify the seasonal movement patterns of sand tiger sharks in the western Atlantic Ocean. Since December 2000, 23 sharks have been tagged and released with Pop-Up Archival Electronic Transmitters off of the coasts of New York, New Jersey, North Carolina, and South Carolina.

Sand Tiger Tracking Program
The study of the movements of juvenile sharks which are found in local New York waters in the late spring/early summer is a crucial component of this project. From 2001-2003, Long Island Aquarium donated surplus juvenile sand tigers purchased from local fishermen, as well as vessels and crew to release tagged specimens back into the ocean. Long Island Aquarium has offered to continue their support in the tagging efforts for juvenile sharks.

Carcharias taurus is a depleted and protected species that migrates through waters governed by various state laws, which sometimes differ from federal law. Sand tigers, like many other large Atlantic coastal sharks, may also move across international boundaries.Â  This ongoing study will provide an understanding of the marine habitats occupied by C. taurus at various times of the year. Such bio-geographical information is critical in order to determine where the species is most vulnerable to depletion from over-fishing or habitat destruction. This knowledge will enable the development of better and more consistent conservation strategies for sand tiger sharks in the western Atlantic Ocean. With increasing concern over the instability of shark populations worldwide, the success of this project will encourage the use of satellite telemetry in conservation-related studies of other potentially depleted shark species.

Description
The study of the biology of a deep sea shark, the chain catshark (Scyliorhinus retifer), that inhabits the continental shelf and slope (at depths of 100-400 meters) from Nova Scotia to Nicaragua.

Abstract
Past studies of feeding kinematics in the elasmobranchs (sharks, skates, and rays) have focused on easily accessible species inhabiting the inshore and epipelagic portions of the ocean. Thus, our knowledge of feeding behavior in deep-sea elasmobranch fishes is nonexistent.

The chain catshark (Scyliorhinus retifer) is a member of one of the most well researched groups of elasmobranchs (order: Carcharhiniformes), yet its feeding strategies are unknown due to its inaccessible deepwater environment (>200m).

To better understand the feeding biology of S. retifer, we utilized high-speed videography to document the kinematic events during capture of two sizes of fish prey. Frame-by-frame analysis of the feeding behavior indicated that the chain catshark utilized stereotypical kinematics to capture its prey. In addition, prey capture was suction-dominated, which is in contrast to its taxonomic grouping among several ram-feeding sharks. Nonetheless, prey capture shows a strong similarity to the basic pattern of kinematic events described in feeding studies of other carcharhinoid sharks; although ram-suction indices were noticeably different from a closely related species (Cephaloscyllium ventriosum) previously studied. The suction-dominant feeding behavior of S. retiferappears concomitant with the feeding behavior of most benthic sharks.

Receive the latest information about the Aquarium's exhibits and animals, upcoming events and promotions, and ongoing projects and happenings.

This website uses cookies to improve your experience while you navigate through the website. Out of these cookies, the cookies that are categorized as necessary are stored on your browser as they are essential for the working of basic functionalities of the website. We also use third-party cookies that help us analyze and understand how you use this website. These cookies will be stored in your browser only with your consent. You also have the option to opt-out of these cookies. But opting out of some of these cookies may have an effect on your browsing experience.
Necessary Always Enabled
Necessary cookies are absolutely essential for the website to function properly. This category only includes cookies that ensures basic functionalities and security features of the website. These cookies do not store any personal information.
Non-necessary
Any cookies that may not be particularly necessary for the website to function and is used specifically to collect user personal data via analytics, ads, other embedded contents are termed as non-necessary cookies. It is mandatory to procure user consent prior to running these cookies on your website.
SAVE & ACCEPT