White-Nosed coatis live in a variety of habitats from tropical lowlands to drier mountain forests in North, Central and South America. Females travel in groups called bands, which can number anywhere from 4 to 40 individuals while males 2 years and up travel alone.

Coatis are omnivores with a diverse diet, consisting of insects, spiders, lizards and other small animals, as well as fruits, nuts, plants and carrion. They use their long snout to sniff out critters underground, and then use their sharp claws to dig them out.

Coati mating season begins early in the year. During this time, solitary males will start to join female bands. These males will fend off rivals and mate with serval females. As mating season ends, males are forced out of the band and mated females will leave about 77 days later. Moms and pups return to the band about 5-6 weeks after birth.

Unlike the other species of coati, White-Nosed Coati populations are apparently stable, through lack of field data may drastically underestimate their numbers. Deforestation, habitat loss and introduced predators, such as cats and boa constrictors, all pose threats to their continual health. The Eastern and Western Mountain Coati species are either endangered or threatened.

Get up close and personal with our coati brothers with our Coati Connection adventure!
Click HERE for more information!

Geoffroy’s marmosets are small primates, easily recognized for their puffed white cheeks, face and neck. They are sometimes called the tufted-ear or white-faced marmoset.

Diet and Lifestyle
Geoffroy’s marmosets are diurnal and arboreal which means they are awake during the day and live in the treetops. They are omnivorous with a diverse diet of fruits, insects, small animals, and sap and gum from trees. In fact, they
have a special set of teeth to hammer into and scoop out this sugar-rich gum! At the Long Island Aquarium, our mammal trainers produce our own gum from plant material and sugar and hide it in toys around the exhibit to enrich our marmosets’ exhibit.

Smart Little Monkeys
In the wild, Geoffroy’s marmosets have observed to follow trains of plundering army ants. The ants flush out many hiding insects and, as the bugs flee from the ants, the marmosets can find themselves easy meals!

What was that sound? Is that a bird?
No! Those chirping sounds that you are hearing are the high-pitched vocalizations of our marmosets that they use to communicate with one another!

Lightweight Monkeys
These primates are tiny and can weigh as much as a juice box! Males may only weigh about 1/2 lb. to 3/4 lb. in the wild and females weigh only about 1/4 lb. In facilities, they can weigh up to a pound due to a reliable, healthy diet! 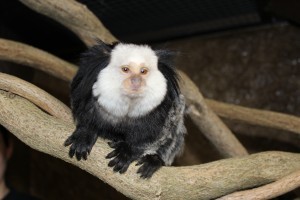 Our seals welcome all visitors to the Long Island Aquarium! Located right outside the main entrance, the 800-square foot natural rockscape pool provides a home to our harbor seals (Phoca vitulina) and our gray seal (Halichoerus grypus).

Unlike sea lions, harbor seals and gray seals are true seals. They lack the ear flaps that sea lions have, but they are just as beautiful! They spend much of their day either lying around on the shorelines or hunting for fish and marine invertebrates in the sea.

The Aquarium’s Marine Mammal trainers work with our seals throughout the day. You can stop by anytime to watch the seals perform a variety of training behaviors or you can simply watch them play! Don’t miss the Seal Training & Feed Session daily. 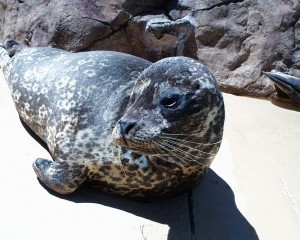 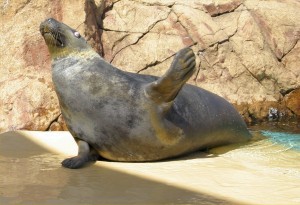 Long Island Aquarium’s Sea Lion Coliseum is the place to go to appreciate the grace, playfulness, and intelligence of the California sea lion (Zalophus californianus).

Sea lions, which get their name from their loud roars, barks, and honks, put on a fascinating show whenever they are in the water! Just look through the underwater viewing windows of our Sea Lion Coliseum inside the aquarium to marvel at these graceful swimmers!

There’s an even better performance waiting for you outside! Long Island Aquarium’s expert mammal trainers put on a daily Sea Lion Show. It’s your opportunity to watch the Aquarium’s talented sea lions – Java, Bunker and  Nila – demonstrate a variety of impressive behaviors!

Any cookies that may not be particularly necessary for the website to function and is used specifically to collect user personal data via analytics, ads, other embedded contents are termed as non-necessary cookies. It is mandatory to procure user consent prior to running these cookies on your website.