The term “Old World,” informally refers to the continents of Africa, Asia, and Europe, though we are grouping Australia into this description as well! This habitat showcases some of the largest, most beautiful, and most interesting aquatic animals from these continents! Though you’d never see these fish living together in the wild, this habitat can help us learn about the many adaptations that they have evolved to help them survive in the tropical, freshwater environments in which they can be found. Like many species from these environments, many of our Old-World Wonders are either threatened or pose environmental risk due to human activities. Meet some of these Wonders below: 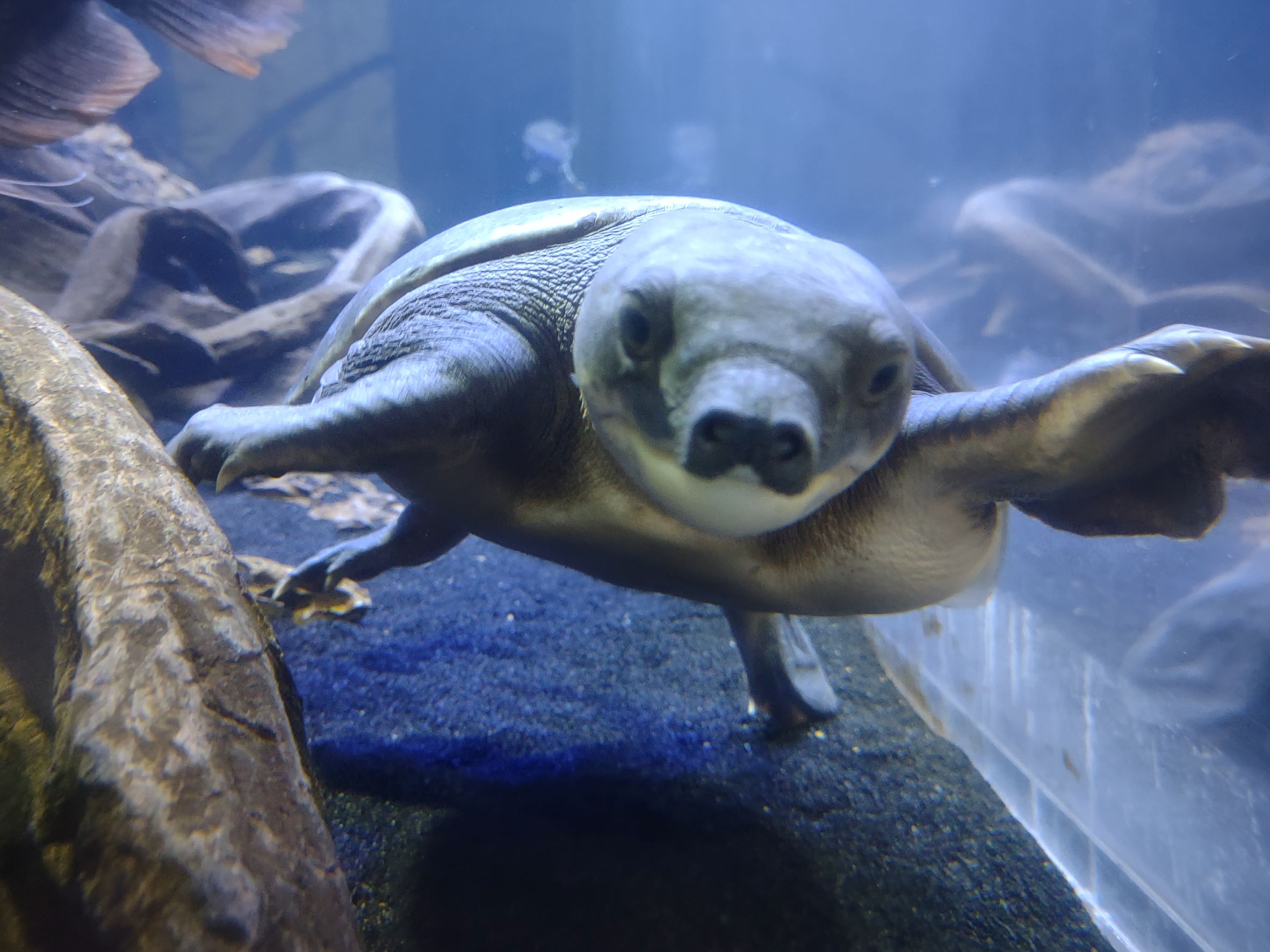 Also known as the Pig-Nosed Turtle because of its odd, fleshy snout, it uses this snout like a snorkel to breathe air at the surface, helping it to survive in oxygen-poor waters. It also uses the nose as a sensory organ to help it find food, such as mollusks or crustaceans, in the murky freshwater lakes and river systems where it lives. Sadly, this is one of the last remaining turtle species of its kind on Earth, and its populations are suffering to due hunting, poaching and illegal smuggling for food and the pet trade.

These nocturnal giants can grow up to 3 feet, and are sometimes called “Featherbacks” because of their long, slim dorsal fin that ripples as it swims. These fish produce weak electrical impulses with a special electric organ that help them to find food in the dark! This electro locating ability also allows them to find mates and communicate with one another! While populations of these fish are healthy, they have escaped and established themselves in other regions in Asia, as well as in Florida in the United States (probably from a pet release). These fish can destroy freshwater ecosystems, feeding on a number of important fish species that humans rely on for food. 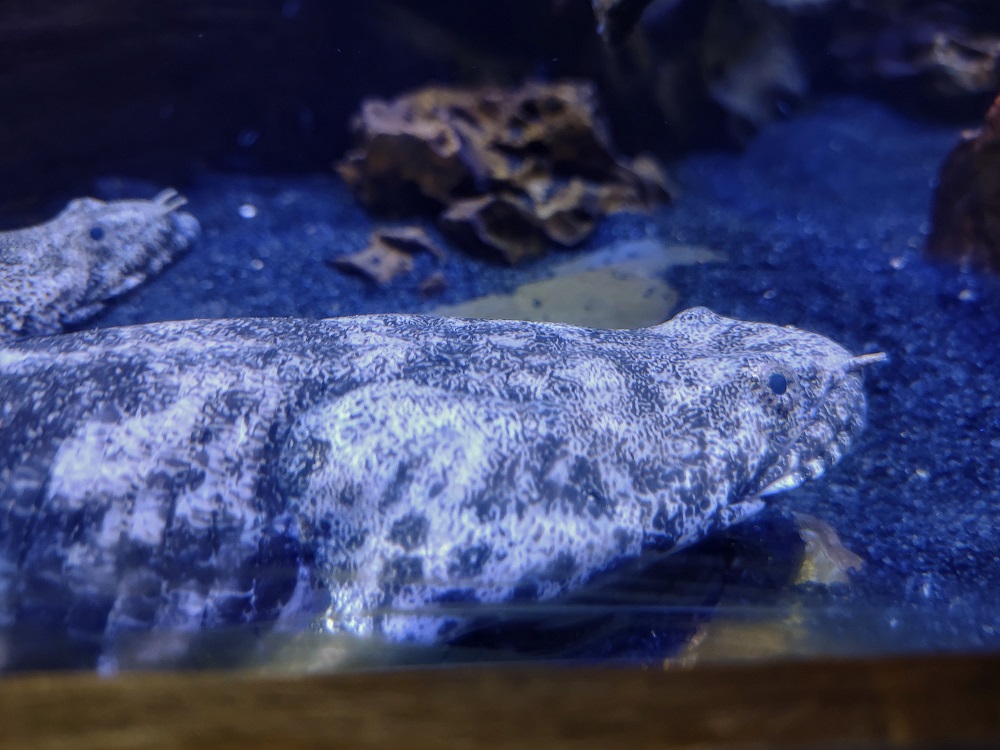 Pronounced “bee-sheer,” these long fish resemble dragons because of the divided dorsal fin on their back. They are nocturnal predators, and will often lie in wait for prey on the river bottom. They also have lungs in addition to their gills, and are able to survive on land for a while if kept moist, allowing them to survive on land for a short period of time in times of drought or if water oxygen content is low. 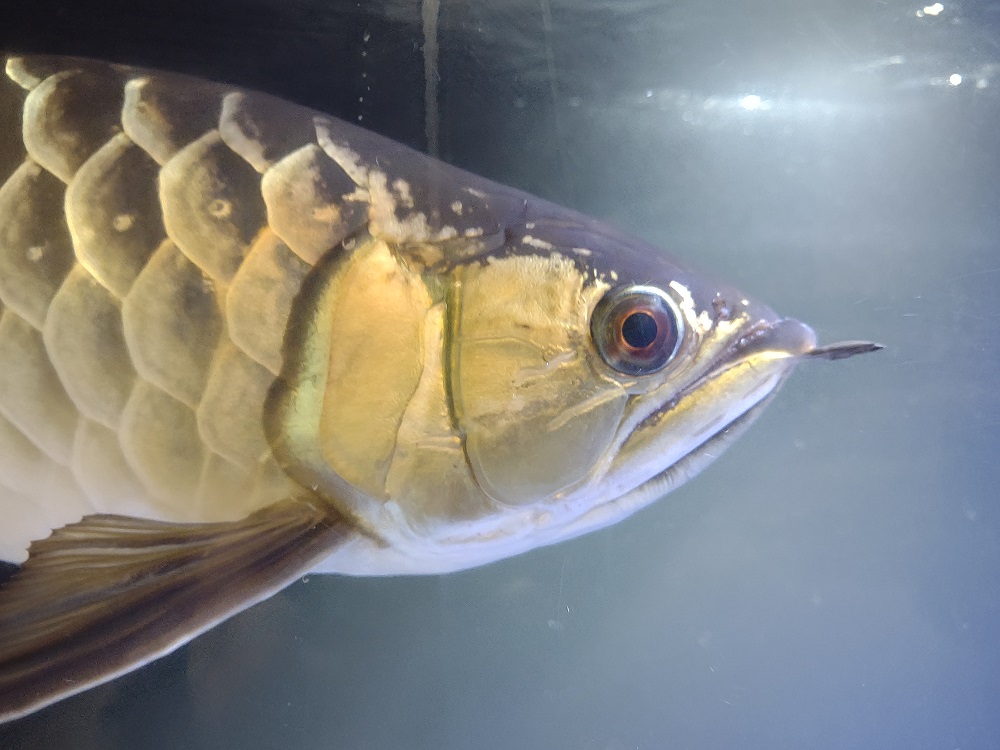 The Australian Arowana prefers to live in river drainage points toward the north of the continent, which are rich in organic material and low-hanging plant life. These fish feed love to feed on insects and other small animals that fall onto or get too close to the river surface, and are known to be powerful jumpers! In this species, females practice mouthbrooding where they incubate their eggs and protect their babies in their mouth! 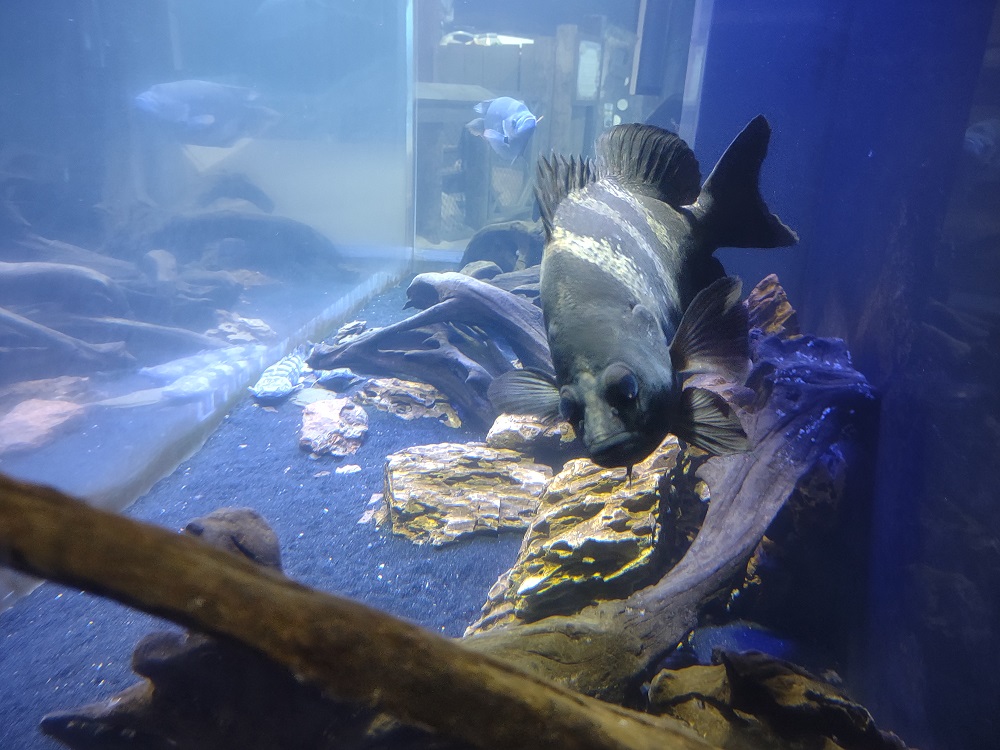 The tigerfish, sometimes referred to as “datnoids,” are commonly found in freshwater and brackish ecosystems from India to Southeast Asia. They are predators on small fish and crustaceans, and likely use their striped patterns as a form of camouflage with aquatic plants and grasses where they live. There are several different species of datnoids, and at least one, the Siamese Tigerfish (Datniodes pulcher) is critically endangered due to over collecting and the illegal animal trade. 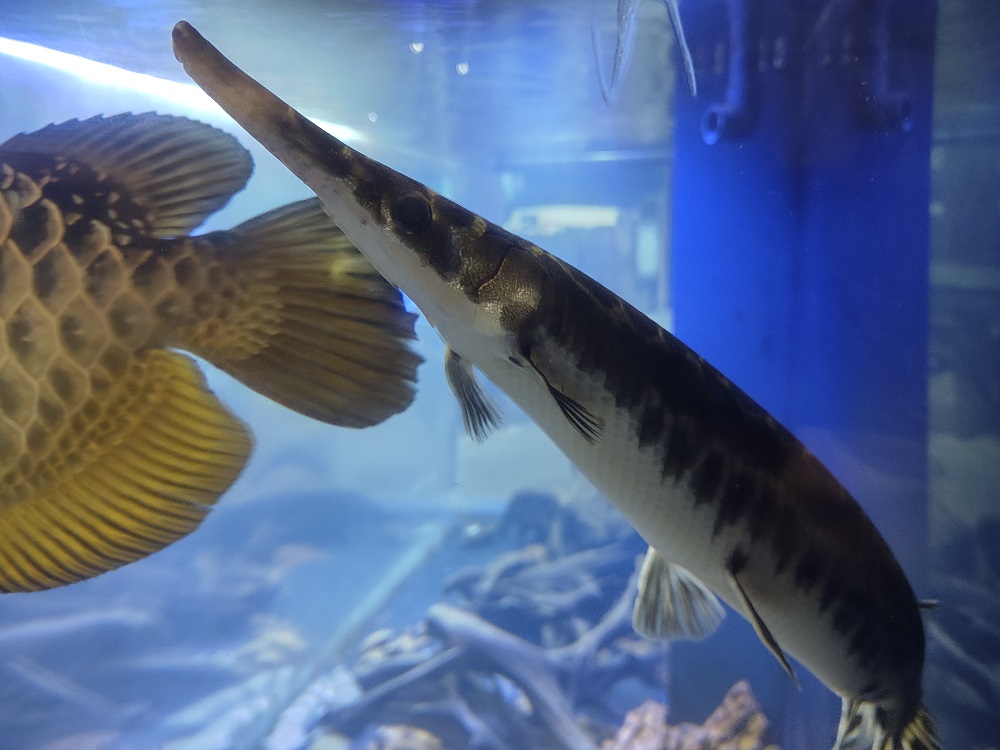 These fish inhabit streams, rivers and ponds where they mostly feed on crustaceans and small fish, using the razor-sharp teeth to tear into their prey. In fact, these fish can bite and attack humans, though when this happens, they are probably mistaking our fingers, toes or hands for their prey! These fish are eaten in some Asian countries, and overfishing has caused their populations to decline. This species has also been introduced into Hawaii (probably due to pet release).

There are many species of Synodontis catfish throughout freshwater ecosystems in Africa. They are sometimes known as “Squeakers” because of the loud noise they produce with their pectoral fins if disturbed. These fish are omnivores, feeding on insects, algae and decaying organic material. Some species have even taken to swimming upside-down at the water surface to pick off insects that fall onto the water surface!

Receive the latest information about the Aquarium's exhibits and animals, upcoming events and promotions, and ongoing projects and happenings.

This website uses cookies to improve your experience while you navigate through the website. Out of these cookies, the cookies that are categorized as necessary are stored on your browser as they are essential for the working of basic functionalities of the website. We also use third-party cookies that help us analyze and understand how you use this website. These cookies will be stored in your browser only with your consent. You also have the option to opt-out of these cookies. But opting out of some of these cookies may have an effect on your browsing experience.
Necessary Always Enabled
Necessary cookies are absolutely essential for the website to function properly. This category only includes cookies that ensures basic functionalities and security features of the website. These cookies do not store any personal information.
Non-necessary
Any cookies that may not be particularly necessary for the website to function and is used specifically to collect user personal data via analytics, ads, other embedded contents are termed as non-necessary cookies. It is mandatory to procure user consent prior to running these cookies on your website.
SAVE & ACCEPT